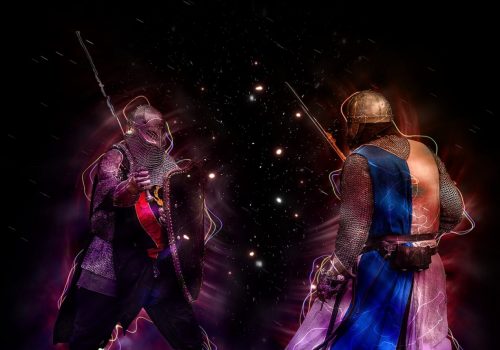 Battle of the Kings

Once upon a time there was a Great King that ruled over all the earth. During his reign, the earth prospered and was at peace.

As time passed, the people began to grumble. Their heart’s desire was to be their own rulers … “What you will was the whole of the law.” This grieved the heart of the Great King. He knew how wicked men’s hearts could be. Yet, this was what his people wanted, so, he gave them what they wanted.

The people rejoiced over their freedom because, now, they were their own rulers. They laughed and jeered as they continued to prosper. Not many years hence, crops began to fail, one by one. Famine hit the land, followed by those who came to steel, kill, and destroy.

A scribe wanted to gain King Cushan-Rishathaim favor. So, he came before him to let him know of an ancient prophecy that was yet to be fulfilled. When certain stars were aligned, then the appearing of a rare pearl would come forth. Whoever possessed this pearl scepter would have untold authority and power. The king would make sure he alone possessed it.

During the time of upheaval, a child was born. Guardians watched over her to protect her. When she came of age, she would take a journey to a land that had been hidden. A land where she would learn about the truth, the way she should go, and the life she would live. Who is this girl? What is her part in all of this? What is her connection to the prophecy?