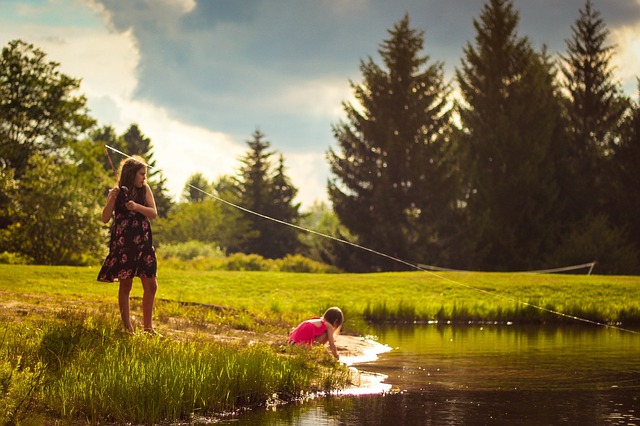 It was raining one Saturday morning but Mom knew the showers would end soon. After lunch, she said the three of us were going fishing. That meant her, my brother, Steve, and myself because dad had to work that weekend. It was a thirty-minute drive to her favorite fishing spot, Jiggs Landing.

I was around eight years old at the time and was more into swimming than fishing. Since I didn’t want to fish, and I wasn’t allowed to swim because the noise would scare the fish away, I had to find another way to entertain myself.

First, I ventured out into the surrounding wooded area, but there wasn’t much to see other than a few moss laden scrub oaks. Besides, there was a set limitation on how far I could wander off from Mom. I explored the trees, sand, and every blade of grass nearby, then went and sat on the side of the river bank.

As I watched the tannic-colored water of Braden River flow by, a Red-winged blackbird flew overhead and landed in a patch of cattails on the opposite side of the narrow river. I observed and listened as he sang his song. During the song, a few insects swarmed nearby. He saw them too. That was it, bird snack time! And, he left as quickly as he came.

It was boring just sitting there. I got desperate for something to do and finally, I found something. I reached over into the container of worms and pulled one out. Then I pulled out another, and another until those wiggly things were all tied together in a knot. Eww, I can’t believe I did that. Anyway, Mom’s only bait container was now empty. When she reached to get some bait, she looked over and saw what I was holding, and she got ticked. It wouldn’t be easy untying those worms, so we loaded the car up with the few fish they had caught and headed home.

Mom had only driven a short distance before the car got stuck on the muddy road. I wasn’t as strong as my thirteen-year-old brother, therefore, I got elected to drive the car. And for an eight-year-old, that was a new adventure.

I was tall enough to see over the dashboard and mash the gas pedal at the same time. At first, I was a little scared. I wondered what would happen if I pushed the gas pedal down too far and the car took off without them. I didn’t know what I would do if that happened. Slowly, I eased down on the pedal and pushed it further and further until I heard them scream, “Stop!”

Oh, yes, I forgot to mention that the car had a clutch. After explaining to me what to do again, I did what I was told, I pushed the gas pedal and let out the clutch. Before the car stalled, the tires spun and covered my thirteen-year-old brother with mud. Now my mother and my brother were both mad at me.

We got home before dark. I had to clean the fish, which I didn’t mind doing, while my brother took a bath. That was a fishing trip none of us would ever forget.

Last Christmas, my Mom was surprised when she opened her present, it was a light-weight fishing pole. When it warms up, I’ll take my 90-year-old Mother fishing, which will make her day.

My first novel does include some fishing stories.